Realtor, Buying, or Selling in the Inglewood Plat?

Please check out our FAQs page.

The IBC owns two pieces of community property for the enjoyment of its members; a triangle of land on Inglewood Hill Road and approximately 125 feet of waterfront below the corner of East Lake Sammamish Parkway and Inglewood Hill Road. 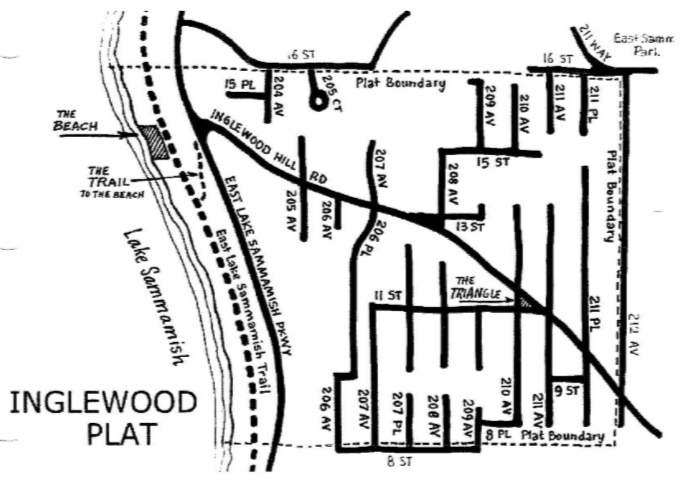 Board members are elected to collect dues and administer the affairs of the club.  During the late 60's and early 70's the club met each year and collected dues to pay taxes and save for improvements.  From 1976 to 1982 there was no Board of Directors, and the taxes were paid from funds accumulated up to 1976.  In response to the threat of losing the properties due to delinquent taxes, a new Board of Directors formed in 1983 to revive the Club, collect dues, and save the properties.  Their efforts were successful and a new Board has been elected each year since.

In 1996, half of the boardwalk was replaced and gravel added to the railroad bed to make it easier to get to the beach.  In 2000, the club purchased 25' of waterfront adjacent to its south border and a billboard was installed to inform the membership of new activities.  In 2001, a perimeter fence and boathouse were funded, constructed, and is maintained by the members.  In 2002, a sandbag wall was built to reclaim lost beach and to protect the tree roots from wave erosion.  In 2004, the rebuilding of the other half of the boardwalk was completed, an upper trail flood bridge was constructed, and a heavy duty 8 foot picnic table replaced its predecessor.  In 2019, another picnic table was added.

With the King County trail development the railroad bed was transformed into a bike trail.  This created a fence along the property line with a maintenance gate access.  A ramp, member gate and lock have been installed to secure and make the property more accessible to its members.

Future maintenance and development depend on three functions of the Board:

Inglewood Beach Club is run by a Board of Directors.  Board members are unpaid volunteers who are elected each year at the annual all-members meeting, which typically takes place in June.  The Board meets monthly to handle strategic and organizational planning and manages club funds to ensure that services are provided to benefit all club members.  Emergency meetings are called as needed.  All current IBC members are welcome to attend board meetings.